Born in Switzerland, Maurus trained at the Zurich dance academy and then at the Hamburg Ballet school where he built up his stage experience dancing in choreographies by Kevin Haigen, Vaslav Nijinsky and John Neumeier.

He began his career at National Youth Ballet John Neumeier in Hamburg. In 2013, he joined the “Gauthier Dance Company” in Stuttgart where he performed in choreographies by Marco Goecke, Ohad Naharin, Hofesh Shechter, Barack Marshall, Nadav Zelner, Helena Waldmann, Nacho Duato, Mauro Bigonzetti and many others… The same year, he received the “Bündner Kulturpreis” in his home canton of Grisons, recognising his work dancing with the National Youth Ballet John Neumeier.

He has been a member of the “Hanover State Ballet” since September 2019, appearing in PRELUDE by Medhi Walerski, THIN SKIN by Marco Goecke, KOSMOS by Andonis Foniadakis, RISE by Emrecan Tanis and CONCERTANTE by Hans van Manen. He played the main role of NIJINSKY and “The Lover” in LIEBHABER by Marco Goecke. 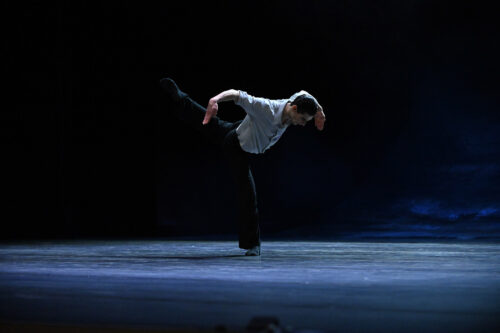