Born in 2002 in the suburbs of Paris, Inès fell in love with dance while watching a documentary on the Paris Opera Dance School. She then took classes at the “Conservatoire à Rayonnement Régional de Paris“ for a year before being admitted to the Paris Opera Dance School at the age of 9 and a half. Inès took all her classes in the French school’s pure tradition. A tireless worker, she has shaped her body little by little, to erase what she called her imperfections. She had the chance to take on her first solo roles in “Raymonda” and “Spring and Fall” by John Neumeier, as well as the leading role in “Les deux Pigeons” by Albert Aveline.

With her schooling completed in 2019, she joined the Corps de Ballet at the Paris Opera Ballet, when she was only 16 years old. She will be promoted to Coryphée in April 2021, after her first Concours (postponed due to the strikes) and to Sujet in the wake of the second Concours, just 6 months later. These promotions gave her confidence and, above all, the opportunity to work on certain soloist roles. In particular, she had the chance to dance the pas de deux of “Flamme de Paris“, which required unparalleled technical skills. 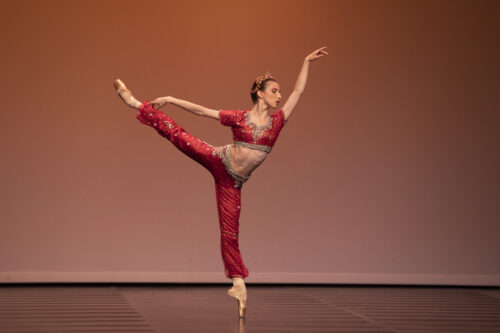